How do you know when a female is gravid?

The females shown in the photos below all bred from February 1st to February 11th, 2021. By May 10th, approximately 90 to 100 days have passed from the breeding season, and the females are in the last stages of pregnancy. My females typically give birth from around a 100 to 120 days after breeding — so any babies that are on the way should arrive in the next 30 days.

Does a female blue-tongue skink that appears gravid always produce live healthy babies? Unfortunately, no, as several things can still go wrong. For instance, females sometimes go through normal parturition but give ‘birth’ to unfertilized ova, which look like big chunks of unsightly ear wax. The masses in the 2 photos below went full term — roughly 100 days — before the female ‘birthed’ them. In this case, there were no fully formed babies that accompanied these unfertilized ova. More often the unfertilized ova will appear along with the birth of normal babies. In many instances, the mom, typically ravenous after birth, will eat these masses — so I usually leave them with her for a few hours before I remove them.

What else can go wrong? A greater tragedy is when babies are born dead — or die shortly after birth. In some cases they look deformed or poorly developed, but in other instances they appear relatively normal and the cause of death is unknown. One possibility is that the babies have died from anoxia, which could occur if the parturition is delayed. It is not clear why the female would fail to give birth at the appropriate time; however,  similar problems arise in mammals, including humans.

Snakes that fail to lay their eggs at an appropriate time are called “egg-bound”, and may require the intervention of a veterinarian. On occasion, a hormone such as oxytocin can be administered to trigger egg-laying or parturition. In one example, a female Northern blue-tongue skink in my collection seemed to have gone past the appropriate time for her to give birth. I took her to a veterinarian, and an injection of calcium gluconate appeared to trigger an appropriate muscle response, and she give birth two-hours after the injection to 10 healthy babies.

The next photo shows 7 dead babies from an extremely disastrous birth in 2019 when most of the female’s litter of 17 babies were either born dead — or died shortly after birth. The female ate very poorly during her pregnancy and was nearly emaciated when she gave birth; this may have contributed to the poor health of so many in this large litter. Many of the dead babies failed to fully absorb their birth sac. Several, however, actually consumed their birth sac and membrane, which is normal, and then died! These deaths remain the most mystifying. Luckily, this event has only happened once although it is not unusual to observe a few dead babies in a normal litter.

(I did not try to breed this unfortunate female, Io, in 2020, deciding that it was best to give her an extra year to fully recover. She did breed in February, 2021, and appears to be gravid again. In the wild, it is quite likely that female Tiliqua may skip years, especially if food availability is poor and their body weight low. Some of my females seem to alternate every other year for giving birth — even with excellent body weight and ideal conditions.

What do these tragedies tell us about Northern blue-tongue skinks? The old aphorism — “Don’t count your chicks before they hatch.” — is true for skinks, too. Fortunately, for most healthy females that eat reasonably well during pregnancy and are offered proper heating and environmental conditions, you can expect mostly live and healthy offspring. And the great news is that once a healthy baby Northern blue-tongue is born, almost all will thrive if given proper food and housing. This is an extremely rugged and adaptable species that thrives in captivity with proper care.

In most gravid female skinks you should expect to see swelling in the lower torso/abdomen and some thinning in the tails and hips. The female normally draws on the stored tissue and fat in the tail and hips to sustain her pregnancy. In some cases, the spine will also become more visible as tissue is lost.

Eos, a very large female, only shows a little loss in the base of the tail.

Glycon, however, shows more thinning in her tail.

Here is IO, one of my silver platinum skinks showing a swollen torso on May 11, 2021. This is the female that lost most of her large litter in 2019. She has much better body weight as she has eaten fairly well during her pregnancy this year. Hoping for a healthy litter of babies.

Selene produced a medium sized litter last year at the age of 2. Almost 3-years old now, she shows the swollen torso and thinning tail and hips that typically indicates the female is gravid.

Sigorney is a large 2-year old and this was her first year breeding. She looks gravid but not so ballooned as Selene and Greta.

Uluru is a 2-year old female. This is her first year breeding.

Zoya is a 6-year old female. This is her third year breeding. She has refused to eat through most of her pregnancy, which is frustrating but she still looks fairly good. Unfortunately, she still has dark scaring on her shoulders from breeding season. Normally, this heals up, but she was chewed on very aggressively by one male. I always chaperone the breeding of my Northern blue-tongues, and interrupt the proceedings if things go wrong. In this case, I didn’t do a stellar job of protecting Zoya from an overzealous male.

Most gravid female Northern blue-tongue skinks will go on and off food during their pregnancy. I offer food several times a week, which includes my homegrown recipe of skink chow as well as mice and rat pups. Most of my gravid females have eaten reasonably well — although irregularly. As I mentioned, Zoya has eaten very poorly, and one other female, not pictured, has eaten close to nothing. Obviously, I am concerned about the health of the mother if they refuse food and begin to look emaciated. Usually, I don’t breed them the following year to make sure they make a full recovery.

I have a two or three other females — not pictured — that might be gravid as well. Those are less obvious in their outward appearance so now I will just need to be patient. I also have several females that bred normally but are clearly not gravid. These females have been treated identically to the females that are gravid; therefore, I don’t have a good explanation for the differing results. Just one of the little mysteries of breeding these amazing creatures in captivity!

Is spermatozoa retention in Tiliqua for long periods a possible reproductive strategy? For captive blue-tongue skink breeding projects, and just a general […]

Baby photos and prices are posted below. I’m posting photos of the parents first so you can see potential adult colors. Posting […] 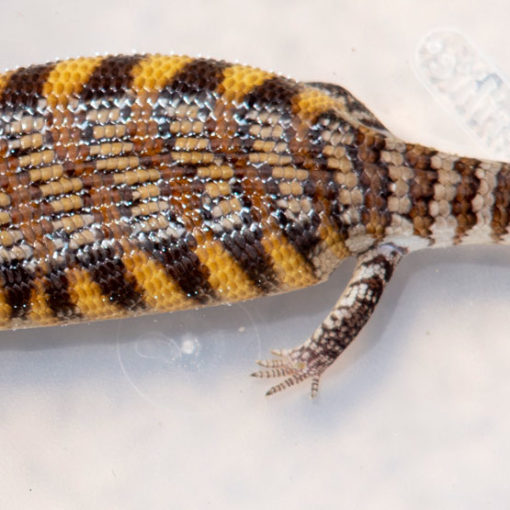 First batch of babies caught me by surprise because it was none of the gravid females that seemed most primed. The mother, […]

One of my young Northern blue-tongues deposited an interesting gauzy material in its water bowl. When I first saw it I thought […]